How the Keto Diet Reduced My Paranoid Schizophrenia Symptoms 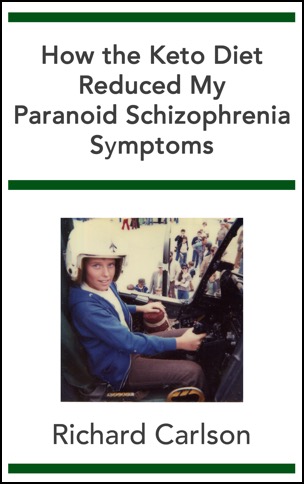 Richard Carlson was diagnosed with paranoid schizophrenia when he was twenty-one years of age. His illness first manifested when he was an early adolescent. Modern psychiatry greatly failed Richard for over a decade. Then, after an incident involving the police, he truly understood that his diagnosis was real, and finally began the long process of recovery. Over sixteen years later, his life is greatly improved. In the course of his treatment, Richard also recovered from depression, obsessive-compulsive disorder, and lethargy.

According to Richard's psychiatrist, Richard would most likely only be seventy percent recovered with the medications presently available. Fortunately, Richard learned about the ketogenic diet on social media which had helped some people with severe mental illness live without symptoms. Richard tried the keto diet, and it reduced his residual paranoid schizophrenia symptoms while he continued to adhere to his psychiatrist’s medication prescriptions. For patients, family members, caregivers, students, and medical professionals who would like to learn more, visit www.schizophreniaketo.com.